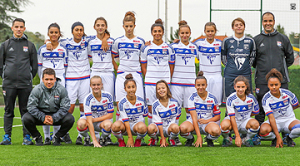 The women’s U-17 section of Olympique Lyonnais returns for the second time to the Paris World Games.

The women’s section of the club was created in 1970. It enjoyed a first period of glory in the 1990s by winning four French championship titles between 1998 and 1998. After becoming once more challengers for the title, integration to the Olympique Lyonnais in 2004 will propel the Lyonnaises to the forefront of the national and international scene, winning eleven consecutive French championships between 2007 and 2017, as well as three European championships in 2011, 2012 and 2016 .