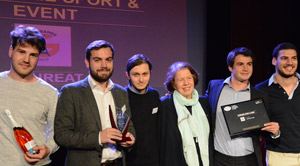 The Paris World Games team was present at the Sport Managers Trophies, organized by the Ecole Supérieur de Gestion MBA, in Boulogne near Paris.

The jury of this 4th edition awarded 5 prizes in total, including the Sports & Events Trophy for the Paris World Games.
The school organizes each year this ceremony to reward the actors of the sports world as well as their projects.
Pierre-Ambroise Bosse, the 800m French Olympic athlete, was the sponsor whose values of respect and sportsmanship perfectly illustrated the evening.

This trophy represents an achievement for our organization and promises beautiful things for the future!