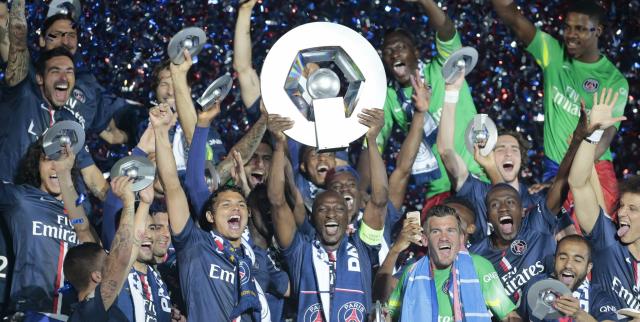 Last Saturday night, after last game day of the French Ligue 1, Paris Saint-Germain finally celebrated the 5th title in its history, the 3rd in a row. To celebrate, the club organized a magnificent firework ceremony after last game. It was also the last game of one of the most faithful icon of the club, Zoumana Camara. To thank their favorite number 6 for 8 remarkable seasons, the fans sung in his honor. The players made him a guard of honor with captain Thiago Sliva having him lifting the trophy in his place. Paris played very well their last game of the season, and thus reached a total of 83 points after a long and difficult season. Edinson Cavani was the hero of the evening by scoring two great goals. While the young and ambitious player Adrien Rabiot also scored during the game. It was the perfect end game and the perfect ceremony for the club to say goodbye to their fans until next season. You may yourself become a champion like the Paris Saint-Germain players. To live that dream in the most beautiful city of the world, you will have to work hard to reach the finals on July 11th. #RoadtoParis