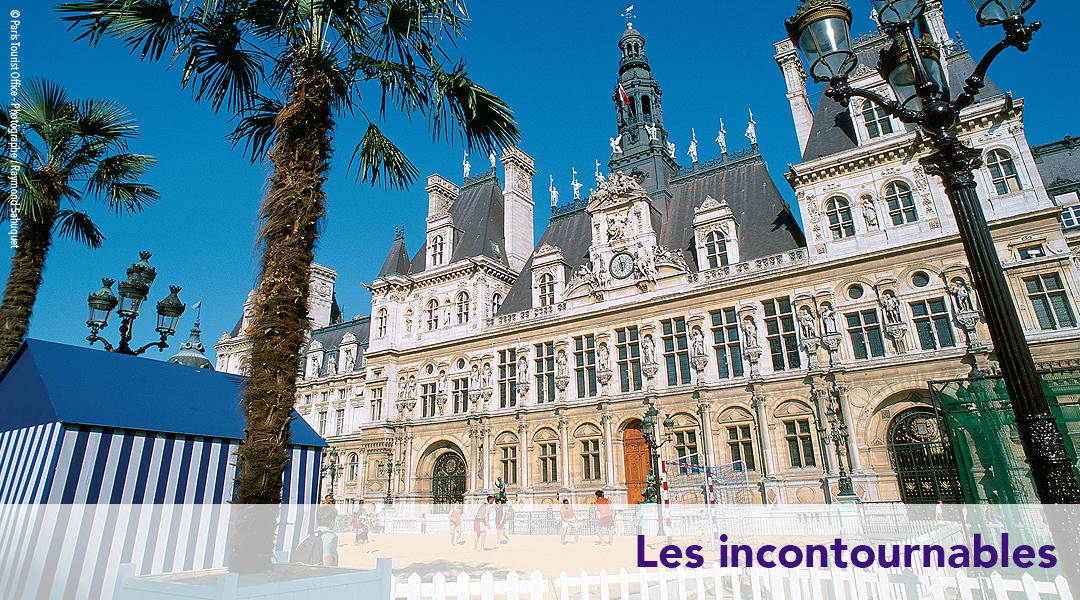 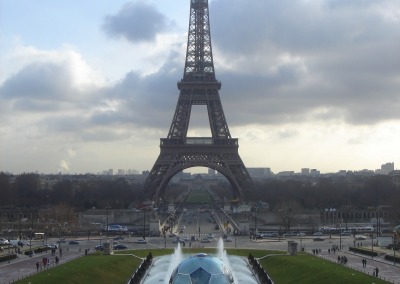 The Eiffel tower is a wrought iron lattice tower on the Champ de Mars in Paris, France. It is named after the engineer Gustave Eiffel, whose company designed and built the tower. Constructed from 1887–89 as the entrance to the 1889 World’s Fair, it was initially criticized by some of France’s leading artists and intellectuals for its design, but it has become a global cultural icon of France and one of the most recognisable structures in the world. The Eiffel Tower is the most-visited paid monument in the world; 6.91 million people ascended it in 2015. 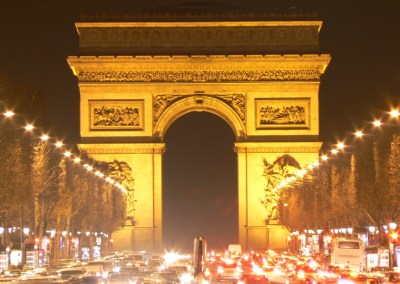 The Arc de Triomphe is one of the most famous monuments in Paris, standing at the western end of the Champs-Élysées at the center of Place Charles de Gaulle, formerly named Place de l’Étoile — the étoile or “star” of the juncture formed by its twelve radiating avenues. the Arc de Triomphe was designed by Jean Chalgrin in 1806, and its iconographic program pits heroically nude French youths against bearded Germanic warriors in chain mail. It set the tone for public monuments with triumphant patriotic messages. Inspired by the Roman Arch of Titus, the Arc de Triomphe has an overall height of 50 metres (164 ft), width of 45 m (148 ft), and depth of 22 m (72 ft), while its large vault is 29.19 m (95.8 ft) high and 14.62 m (48.0 ft) wide. The smaller transverse vaults are 18.68 m (61.3 ft) high and 8.44 m (27.7 ft) wide. 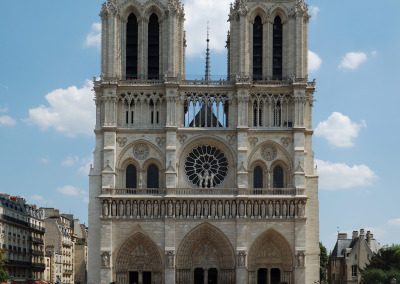 Notre-Dame, is a medieval Catholic cathedral on the Île de la Cité in the fourth arrondissement of Paris, France. The cathedral is widely considered to be one of the finest examples of French Gothic architecture, and it is among the largest and most well-known church buildings in the world. The naturalism of its sculptures and stained glass are in contrast with earlier Romanesque architecture. As the cathedral of the Archdiocese of Paris, Notre-Dame contains the cathedra of the Archbishop of Paris, currently Cardinal André Vingt-Trois. The cathedral treasury contains a reliquary, which houses some of Catholicism’s most important relics, including the purported Crown of Thorns, a fragment of the True Cross, and one of the Holy Nails. In the 1790s, Notre-Dame suffered desecration in the radical phase of the French Revolution when much of its religious imagery was damaged or destroyed. An extensive restoration supervised by Eugène Viollet-le-Duc began in 1845. A project of further restoration and maintenance began in 1991.

The Carnavalet Museum in Paris is dedicated to the history of the city. The museum occupies two neighboring mansions: the Hôtel Carnavalet and the former Hôtel Le Peletier de Saint Fargeau. On the advice of Baron Haussmann, the civil servant who transformed Paris in the latter half of the 19th century, the Hôtel Carnavalet was purchased by the Municipal Council of Paris in 1866; it was opened to the public in 1880. By the latter part of the 20th century, the museum was full to capacity. The Hôtel Le Peletier de Saint Fargeau was annexed to the Carnavalet and opened to the public in 1989. 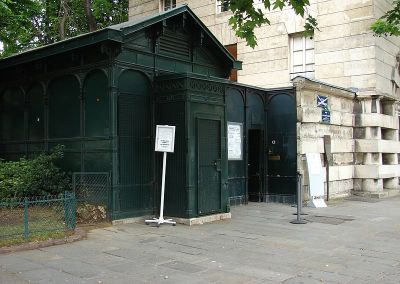 The Catacombs of Paris are underground ossuaries in Paris, France, which hold the remains of more than six million people in a small part of the ancient Mines of Paris tunnel network. Located south of the former city gate “Barrière d’Enfer” (Gate of Hell) beneath Rue de la Tombe-Issoire, the ossuary was founded when city officials had two simultaneous problems: a series of cave-ins beginning 1774, and overflowing cemeteries, particularly Saint Innocents. Nightly processions of bones from 1786 to 1788 transferred remains from cemeteries to the reinforced tunnels, and more remains were added during later years. The underground cemetery became a tourist attraction on a small scale from the early 19th century, and has been open to the public on a regular basis since 1874 with surface access from a building at Place Denfert-Rochereau in the extreme southern part of the city of Paris. 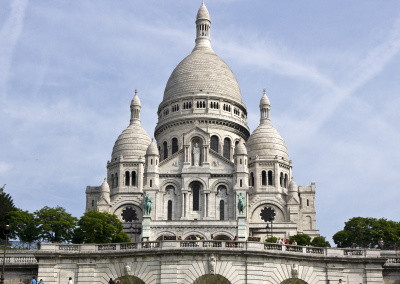 Sacré-Cœur Basilica and often simply Sacré-Cœur is a Roman Catholic church and minor basilica, dedicated to the Sacred Heart of Jesus, in Paris, France. A popular landmark, the basilica is located at the summit of the butte Montmartre, the highest point in the city. Sacré-Cœur is a double monument, political and cultural, both a national penance for the defeat of France in the 1871 Franco-Prussian War and the socialist Paris Commune of 1871 crowning its most rebellious neighborhood, and an embodiment of conservative moral order, publicly dedicated to the Sacred Heart of Jesus, which was an increasingly popular vision of a loving and sympathetic Christ. The Sacré-Cœur Basilica was designed by Paul Abadie. Construction began in 1875 and was finished in 1914. It was consecrated after the end of World War I in 1919. 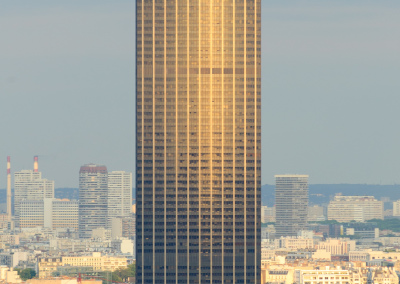 Tour Maine-Montparnasse (Maine-Montparnasse Tower), also commonly named Tour Montparnasse, is a 210-metre (689 ft) office skyscraper located in the Montparnasse area of Paris, France. Constructed from 1969 to 1973, it was the tallest skyscraper in France until 2011, when it was surpassed by the 231-metre (758 ft) Tour First. As of March 2017, it is the 14th tallest building in the European Union. The tower was designed by architects Eugène Beaudouin, Urbain Cassan, and Louis Hoym de Marien and built by Campenon Bernard.

The Musée d’Orsay is a museum in Paris, France, on the left bank of the Seine. It is housed in the former Gare d’Orsay, a Beaux-Arts railway station built between 1898 and 1900. The museum holds mainly French art dating from 1848 to 1914, including paintings, sculptures, furniture, and photography. It houses the largest collection of impressionist and post-Impressionist masterpieces in the world, by painters including Monet, Manet, Degas, Renoir, Cézanne, Seurat, Sisley, Gauguin, and Van Gogh. Many of these works were held at the Galerie nationale du Jeu de Paume prior to the museum’s opening in 1986. It is one of the largest art museums in Europe. 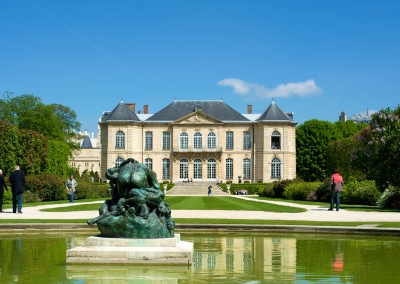 The Musée Rodin in Paris, France, is a museum that was opened in 1919, dedicated to the works of the French sculptor Auguste Rodin. It has two sites, at the Hôtel Biron and surrounding grounds in central Paris, and just outside Paris at Rodin’s old home, the Villa des Brillants at Meudon (Hauts-de-Seine). The collection includes 6,600 sculptures, 8,000 drawings, 8,000 old photographs and 7,000 objets d’art. The museum receives 700,000 visitors annually.

The museum was founded in 1882 by Arthur Meyer, a journalist for Le Gaulois, and named for its first artistic director, caricaturist Alfred Grévin. It is one of the oldest wax museums in Europe. Its baroque architecture includes a hall of mirrors based on the principle of a catoptric cistula and a theater for magic shows. The hall of mirrors was built for the Exposition Universelle in 1900. It was originally housed in the Palais des mirages designed by Eugène Hénard. The Musée Grévin now contains some 450 characters arranged in scenes from the history of France and modern life, including a panorama of French history from Charlemagne to Napoleon III, bloody scenes of the French Revolution, movie stars, and international figures such as Albert Einstein, Mahatma Gandhi, Shah Rukh Khan, and Pope John Paul II. The tableau of Charlotte Corday murdering Jean-Paul Marat includes the actual knife and bathtub used. 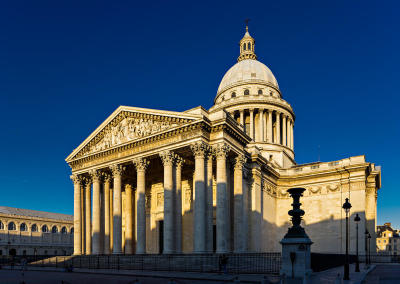 The Panthéon is a building in the Latin Quarter in Paris. It was originally built as a church dedicated to St. Genevieve and to house the reliquary châsse containing her relics but, after many changes, now functions as a secular mausoleum containing the remains of distinguished French citizens. It is an early example of neo-classicism, with a façade modelled on the Pantheon in Rome, surmounted by a dome that owes some of its character to Bramante’s Tempietto. Located in the 5th arrondissement on the Montagne Sainte-Geneviève, the Panthéon looks out over all of Paris. Designer Jacques-Germain Soufflot had the intention of combining the lightness and brightness of the Gothic cathedral with classical principles, but its role as a mausoleum required the great Gothic windows to be blocked. 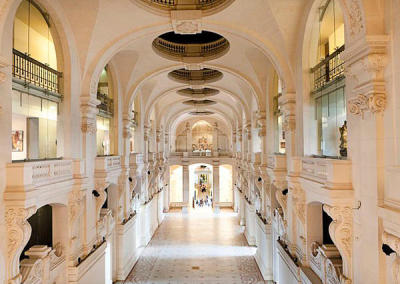 Musée des Arts Décoratifs (Museum of Decorative Arts), a museum of the decorative arts and design, located in the Palais du Louvre’s western wing, known as the Pavillon de Marsan, at 107 rue de Rivoli, in the 1st arrondissement of Paris, France. It is one of three museum locations of Les Arts Décoratifs. The museum also hosts exhibitions of fashion, advertising and graphic art from its collections from the formerly separate but now defunct Musée de la Publicité and Musée de la mode et du textile.

The Palace of Versailles, Château de Versailles, or simply Versailles, is a royal château in Versailles in the Île-de-France region of France. When the château was built, Versailles was a small village dating from the 11th century; today, however, it is a wealthy suburb of Paris, some 20 kilometres (12 miles) southwest of the centre of the French capital (point zero at square in front of Notre Dame). Versailles was the seat of political power in the Kingdom of France from 1682, when Louis XIV moved the royal court from Paris, until the royal family was forced to return to the capital in October 1789, within three months after the beginning of the French Revolution. Versailles is therefore famous not only as a building, but as a symbol of the system of absolute monarchy of the Ancien Régime. 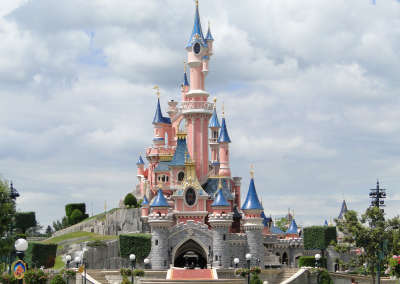 Disneyland Paris, originally Euro Disney Resort, is an entertainment resort in Marne-la-Vallée, a new town located 32 km (20 mi) east of the centre of Paris, and is the most visited theme park in all of Europe. It is owned and operated by Euro Disney. The resort covers 4,800 acres (19 km2) and encompasses two theme park, many resort hotels, a shopping, dining, and entertainment complex, and a golf course, in addition to several additional recreational and entertainment venues. Disneyland Park is the original theme park of the complex, opening with the resort on 12 April 1992. A second theme park, Walt Disney Studios Park, opened in 2002. The resort is the second Disney park to open outside of the United States following the opening of the Tokyo Disney Resort in 1983.