The game, which was played in joy and sportiness, saw the Saudi women win.
But more than the result, it is above all the symbols sent by this team that must be retained.
Indeed, this is the first time that women players from Saudi Arabia have come to Paris to play a game, and with an exclusively female staff!
The founder of the club, former player herself, had to negotiate for almost 7 years to allow women to be able to play abroad without any tutors. She is now fighting for the integration of women’s sport in all schools, from kindergarten to university.

This encounter summarizes the core values ​​of the Paris World Games, and even broadly, of the Paris 2024 Olympics nomination: exemplarity, excellence and respect. 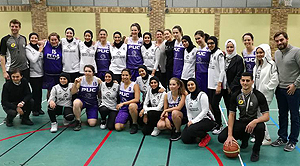