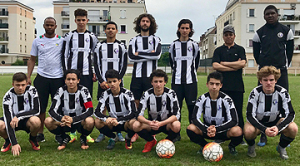 Club Athlétique de Paris, or CA Paris XIVe, is a parisian club created in 1897, playing in the Regional Superior Division of the Ile-de-France Football League. For the record, it is as old as the legendary club of Juventus of Turin, and shares the same jersey colors.

A popular and emblematic club of intramural Paris, it plays his games at the Stade Didot, where some matchs of the Paris World Games will take place.
Its youth teams were present in the first two editions of the tournament, and return this year to try to win a maximum of games!
In fact, the senior feminine team won the last year tournament!