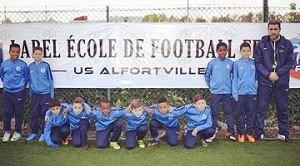 US Alfortville Football was created in 1958 under the name of “Lions d’Alfortville”.
After several changes, the club settled permanently in the Ile-de-France football landscape.
In 2001 the U-13 acceded in Division of Honor then in 2002, the Alfortvillais acceded to the 14 years in federal. The seniors of the club are in Promotion of Honor.
The Quality label football school glues to Alfortville, in fact since 2010 the club is denominated and certified by the LPIFF and the District of Val de Marne. They will compete in the U-10 category at the Paris World Games.

The club now has over 750 members!
You can find their site here.