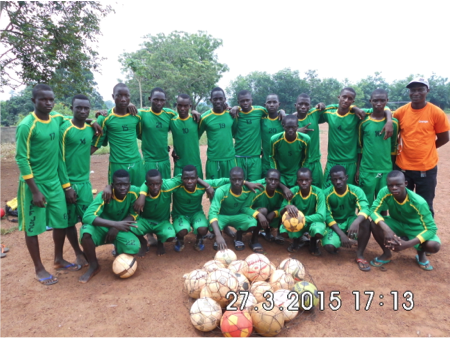 This year, Paris World Cup will receive several teams of Ivory Coast, the country champion of Africa. We have perceived the president of the league of Gôh, representative of Juvenat Sacre Coeur. This one presented this club more amply to us.

Juvenat Sacre Coeur is a training center of football, which is taking its first steps at the national and international level. The team coming to the tournament is in the U16 category. According to the statement of its representative, the players who compose it are “very ambitious and invested“. And they have shown it this season by reaching the semi-finals of the championship of the federation of the training centers of football of the GÔH, the young championship of the league of Ivory Coast having been stopped for more than 10 years.

It is besides with a conquering state of mind that they will come to Paris. For him, the club comes “to win and show the talents of its players to the French public”. Indeed one of them could be the surprise of the tournament, the striker named Adebayor that the president of the league of Gôh as told us to watch him very closely if he comes at the tournament. He remind us that Gagnoa is the heart of football of the Ivory Coast and left great names like Drogba, Kalou, and well of others.

For the club, it is an honor to represent its entire district but also its country in Paris on July 6th. They are excited to take part in Paris World Cup because according to him the organization of an international tournament of football in Paris is “a revolution which will bring much change in the soccer world”. For the players, he confesses us that despite their happiness and the pride, which prevail on their premises, they are also stressed by the challenge of the tournament.

Let us hope that they will sometimes happen to draw something positive from it because their ambition is clear: win the U16 tournament while impressing the French public !